Why are our satellites in Low Earth Orbit?

Many people, myself included, get their television from satellites. We place a small almost circular ‘dish’ antenna on our home, point it towards the sky and turn the electronics on to receive entertainment via our televisions.  Once setup, the ‘dish’ does not have to move unless you do.

We all know that the earth is round and that it spins on its axis.  This makes any given point on the earth alternate between night and day as one side points towards the brightness of the sun then towards darkness of space. So how does that ‘dish’ continue to provide entertainment to our homes since the earth is constantly spinning?

The answer comes from the fact that the satellites typically used by satellite television are located in a ‘GEO-stationary’ orbit (GEO). A satellite placed into GEO rotates around the earth at the same direction that the earth is turning and at a speed that keeps it in the same spot in the sky all the time. The result is that it will appear to anyone (or any ‘dish’) on the earth’s surface to always be in the same location in the sky overhead. It is stationary relative to the geography of the earth but it is moving very fast around it. GEO satellites are great for relaying radio frequency (RF) signals such as television to/from large portions of the earth.

Physics dictates that the points in space that produce ‘GEO-stationary’ orbits are located 22,500 miles (36,210 km) directly above the equator. For radio frequency (RF) signals to travel that far (almost the same distance as the circumference of the earth) and be intelligible by a satellite you need a very strong signal, a very sensitive receiver, a very focused antenna beam or the right combination of all of these things. The reverse (i.e. satellite to ground) is also true.

At that altitude above the earth’s surface, the footprint (the portion of the earth that is visible to the satellite at altitude) of the satellite can have more than a third of the surface covered all of the time. To provide coverage for the entire world with the same signal from a GEO-stationary orbit requires roughly 3 satellites.

This would seem an ideal location to receive RF signals such as Automatic Identification Service (AIS) from space.  With just 3 satellites we could know where all the ships in the world are located constantly.  There is one significant problem, however.  After traveling 22,500 miles an AIS signal is so weak that receivers placed into this orbit are not able to detect them.

To fix this problem we must bring the satellite(s) much closer into what is known as a Low Earth Orbit (LEO) so they can actually detect the AIS signals. By bringing the satellite closer, however, the satellite footprint is much smaller, only about 3000 miles (5000 kilometers) in diameter. The satellite is also no longer stationary relative to the earth’s surface. In the case of Iridium NEXT satellites, the altitude is about 500 miles (800 km) when the satellite is directly overhead. At this altitude any given satellite pass, from horizon to horizon, takes about 10 minutes and it will be about 100 minutes before it goes overhead again.  To provide continuous coverage there must be many more satellites and they need to maintain a fixed relationship between each other. In the diagram below, the LEO satellite and its footprint are in what is called an orbital plane.  If you want to have continuous coverage you need multiple orbital planes with overlapping footprints. 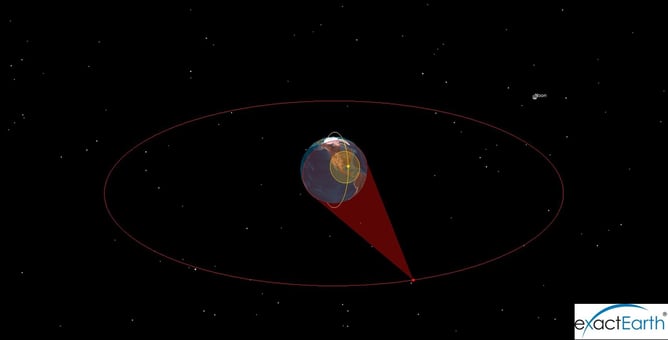 The Iridium NEXT satellite constellation is the ideal platform to support AIS detection from space. It consists of satellites placed into 6 different orbital planes and 11 satellites evenly distributed in those planes.  Each satellite maintains a fixed relationship with all of the other satellites around it to provide continuous coverage of the entire world.  Employing patented technology from exactEarth combined with the advanced antenna and processing technologies provided by Harris Corporation, exactView RT powered by Harris will provide the world with the highest quality lowest latency maritime detection capability possible for many years to come. 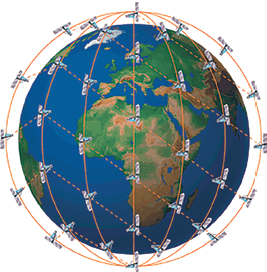 Graphical representation of the Iridium NEXT constellation