In 2010 the maritime world began to discover a new technology for monitoring ship movements across the world’s oceans— Satellite AIS.

Automatic Identification System (AIS) is a global technology mandate that was adopted by the International Maritime Organization (IMO) to aid mariners in avoiding collisions with other vessels.  It was designed and intended to be a local communications capability that let mariners know what other ships were in their vicinity, which way they were going, how fast they were going and a number of other characteristics that would prevent two or more ships from getting too close. This technology was deployed on all ships 300 tons and larger as well as passenger ships of any size.

As the deployment of the technology grew, land based Coastal AIS systems were placed around ports and coastlines.  This allowed governments and other authorities to know what ships were coming and going when vessels traversed nearby but often out of visual range. As a ship got close, regular near real-time updates were available on the ship’s progress as long as it was in the local communications range of AIS.

By 2008, radio receiver technology from satellites had evolved to a point where low earth orbiting (LEO) satellites could also receive AIS communications.  A single satellite could detect the local signals produced by hundreds or thousands of ships within its footprint which spanned over thousands of ocean miles. Depending on the orbit of the satellite and the latitude of the area of the ocean, the satellite would fly overhead about once every 90 minutes (at the North and South Pole) or a couple of times a day at the equator. That one satellite began to paint a picture of shipping that no one had ever seen.  It identified where nearly every AIS equipped ship in the world was located at least once per day. 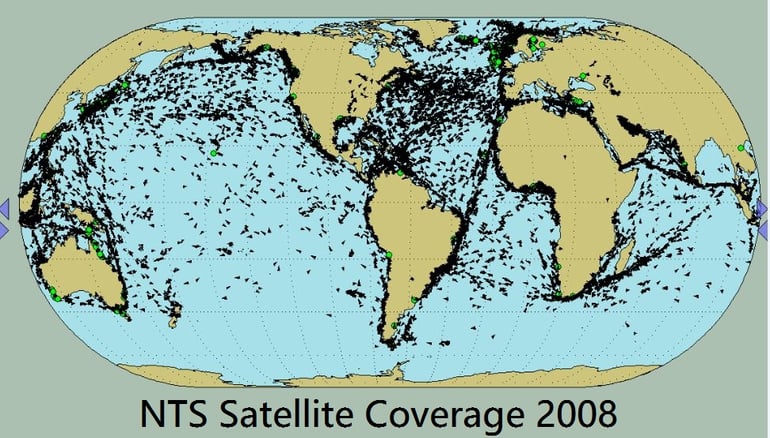 Back in 2008 it took exactEarth 1 day to produce the above image. Now we complete an even more comprehensive picture of the world's shipping at least once every hour

exactEarth started with one satellite in Low Earth Orbit.  About once per day we were able to provide a complete picture of where every ship in the world was located (shown above).  After extensive market research we concluded that customers needed the AIS information we could produce at least once per hour and within 30 minutes of collection. We set our company on the path of updating the complete maritime global picture to meet those customers’ needs.

To do this we deployed our Generation 1 constellation of satellites into a range of orbits circling the globe.  We also built an extensive ground station network that allowed us to get the AIS data to our customers within 30 minutes.  Our goal has always been to provide the highest quality detection performance available with the lowest latency possible. Our Generation 1 constellation does just that by utilizing long-lasting satellites that provide the best detection possible and  a sufficient number of strategically located ground stations to achieve customers’ needs.

Today the world has embraced satellite based AIS technology as a requirement to provide maritime domain awareness, aid in search and rescue operations or environmental protection practices along with  many other valuable use cases.

As with any good idea or business, we needed to look to what is next.  When the opportunity arose for exactEarth to be a part of the Iridium NEXT satellite constellation, it quickly became clear that this needed to be our Generation 2 maritime ship location technology.

We combined our world leading patented AIS detection technology with one of the most responsive and flexible satellite processing technologies available and are deploying it on the next generation of Iridium’s global continuous real-time coverage satellite constellation. This creates a service equivalent, in terms of detection and latency, to those Coastal AIS systems deployed around ports and along coastlines with one big difference — Our service will be far superior since it reaches every corner of the globe including every part of the world’s oceans!

In partnership with Harris Corporation, we have built and will begin deploying later this summer, exactView RT powered by Harris.  A maritime vessel location system, of which satellite AIS is one significant part, that will provide ship detection of every part of the world’s waterways on average once per minute and deliver that information to customers on average within 1 minute.

exactView RT will continue the world leading service that we started with exactView.  It will respond to our customers need to know where all of the ships in the world are located in Real-Time (RT).  In addition, exactView RT provides a programmable platform for a wealth of new and expanded maritime services over the next 15 years ( the expected lifetime of the Iridium Next satellite constellation), that we and our partner Harris can offer to customers.