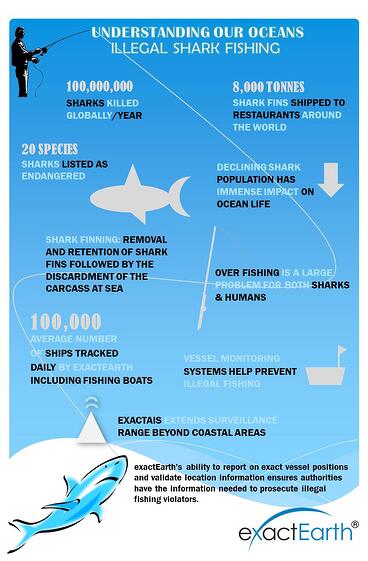 Due to increased levels of shark fishing, populations are decimating globally and sharks are no longer able to fully mature before being finned. These factors significantly impact the reproduction cycles of sharks and makes them highly susceptible to extinction. It is important to note that sharks are not the only ones impacted as these creatures are ecological stabilisers and without them the whole ocean ecosystem is affected including the coral reefs.

Through the tracking of vessels worldwide with Satellite AIS, this crucial information can help to decrease the levels of illegal shark fishing taking place in our oceans. With vessel monitoring systems and the extended surveillance provided through exactAIS® data, authorities are able to better detect suspicious fishing behaviour and can then prosecute more illegal fishing violators.