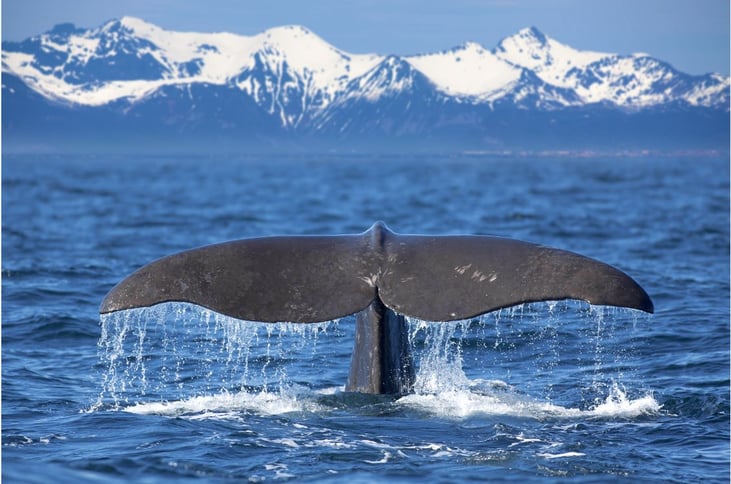 The NOAA Fisheries Service established their Compliance Guide for Right Whale Ship Strike Reduction Rule (50 CFR 224.105) which sets out the ground rules for how ships should operate around certain waters with right whales at certain times.

NOAA's efforts are for good reason as all whales are protected under the Marine Mammal Protection Act and blue, humpback, fin, sperm, and western North Pacific gray whales are listed as endangered under the Endangered Species Act.

A 15 year study with 171 blue whales from the eastern North Pacific grouping used satellites to track the whale migratory patterns over a long period of time. In the end, scientists involved in the study declared whale-ship collisions as a possible factor in why blue whale population numbers have remained low despite international protections. In this particular case, the researchers say shipping lanes near the whales' migratory routes would need to be moved to end the collisions.

The combination of high traffic, feeding areas, and migratory whale routes result in a marked increase risk of ship strikes to whales that can result in serious injury or death to whales. Unfortunately many incidents of ship strike around the coast go unnoticed or unreported, and this makes it difficult to understand the scope of the problem.  For instance, large vessels such as cruise ships may not perceive the impact of a collision – even with a large whale species.

Whale injuries and deaths from ship strikes are a problem worldwide not just in the US with an increasing number of ship strikes also occurring in Australia's Great Barrier Reef, coastal areas of Sri Lanka and other parts of the northern Indian Ocean

The International Whaling Commission has put together a database of all reported whale ship strikes, click here to learn more.

The question remains of how best to monitor the ship strike situation and prevent future incidents while allowing for efficient shipping practices and ensuring the safety of the world's whale populations.

With Satellite AIS, ships deviating from mandatory routing and speed restrictions can be easily monitored.

NOAA Fisheries Service has mandatory speed restrictions on ships over 65 ft (19.8 m) in length travelling along the US East Coast during times where right whales are likely to be present, which is right about now according to Cape Cod Today. The speed restrictions are due to evidence that ships travelling at low speeds may reduce the likelihood of a lethal ship strike so NOAA has set the speed limit to 10 knots or less.

If a deviation from the 10 knot speed restriction is necessary, masters or pilots have to enter their reasoning into their logbooks for further review.

We decided to perform some vessel monitoring of our own to take a look at how well ships were following the rules set forth by NOAA to protect the right whales' feeding areas off the east coast of the US.

In our exactEarth ShipView product, you can easily set up an alerting feature to notify you when a ship meets (or no longer meets) your specified criteria. So we drew our polygon area to match the feeding areas and set up an alert for ships meeting the size criteria that were travelling faster than they should be.

As you can see above we were alerted to a couple vessels travelling over the speed limit for this protected right whale feeding area including a tanker and a cruise ship traversing at 7 kn over the limit the entire way through.

AIS messages contain the speed, position and heading of the vessel so it's quite easy to monitor for any ships deviating from any mandatory limitations or entering into areas they shouldn't be. With the alerting services in exactEarth ShipView, you can be instantly notified to allow for consistent enforcement of these important rules.

Get ShipView into your operations today!

Historical Satellite AIS data from exactEarth can also play an important role in determining traffic patterns for the most efficient shipping lanes around whale migratory routes.

Effective marine spatial planning requires a comprehensive look into the history of shipping pattern models in order to accurately predict risks to key marine species. With our historical data not only can you look back on shipping tracks over time, you can also use the traffic pattern data to develop alternative shipping routes; ones that work for both vessel and whale.