“Rapid warming in the Arctic has led to the opening up of commercial sea routes in the region.  While destination ship traffic in and out of the Arctic is expected, the greatest traffic increase in the next decades, transport over the Northern Sea Route (above Russia and Scandinavia), has seen substantial growth over the past few years and is in particular being targeted as a route for tanker and bulk traffic.  Increased traffic in these waters, coupled with the fact that the Arctic is up to 95% unsurveyed and chart coverage is generally inadequate for coastal navigation, means that the risks of operating should be matched with suitable precautionary measures in order to protect the environment. “

The lack of charting in the region means that the majority of the shipping lanes are dependent upon the ice breakers, and the charting data will need to be close to real time to be relevant in the area. 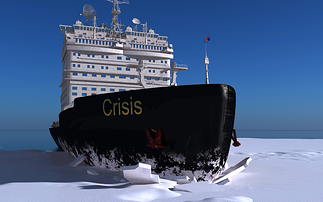 The IMO has defined AIS Application Specific Messages (ASM) that could be used to convey real-time bathymetry data to an agency like the United Kingdom Hydrographic Office (UKHO) to provide chart updates for any ships entering these dangerous waters.  However, there needs to be some mechanism to get these updates to the charting authorities without undue expense to the ship owner.  That's where satellite AIS can play a significant role.

exactAIS® coverage in the polar regions provides updates approximately every 20 minutes.  We’re also working to develop techniques that will ensure reception of these specialized application specific messages in the near future.  If authorities also take this opportunity to use the new ASM channels, granted at the last World Radio Conference, then we will be able to transmit this data, with a high probability of reception, without perturbing existing AIS collision avoidance messages.